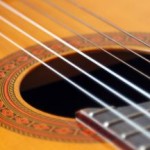 I feel humbled and inspired at the same time when I hear of people who have overcome great challenges in their lives in order to develop their skills or talents in some area. One example is singer-guitarist Tony Melendez.

Tony was born in Nicaragua, but has lived most of his life in the United States. He was born without arms. This was a side effect from the drug thalidomide, which his mother took while pregnant with him. However, Tony has not allowed this challenge to stop him from living life fully. He drives and does many other things with his feet, including playing the guitar.

At an early age Tony began to play with the guitar, like a toy, with his feet. Eventually he was practising for six or seven hours a day. He has become a talented singer, guitarist and composer, and has played before audiences around the world. He has produced several albums and received various awards. His bestselling autobiography, “The Gift of Hope: The Tony Melendez Story,” was published in 1989. Here is one of many youtube clips of Tony.

Watching the above video and reading about Tony’s life has encouraged me to do more with the abilities I have been given, to make the most of what I have. We can all do this. We all have something to give, whether it be a smile,  a song, an encouraging word, a work of art, a home-made pie or a listening ear. In my own experience, when I use and give what I have, I am often more fulfilled and receive more joy as I see others uplifted.

His autobiography on DVD

I would like to end this post with these questions: What areas of your life are you now inspired to develop further? What actions are you planning to take to do this? I would love to read your responses in the comments!